Recent my co-worker Nathan R Elson, wrote a blog about the decision parallax. (I’ll be the first to admit I had to look up the word parallax!) I really dig the practical aspect of understanding how to make a decision that helps short circuits procrastination and allows forward movement.

Question 1: Ask will the project be derailed if I don’t have an answer to this right now? This determines priority and urgency. Failure to answer this question correctly can mean that you’ll either get stuck because there are too many decisions to make OR that something on the project will be “blowing up” soon.

Question 2: Ask can/may I make this decision? This determine whether I am allowed to and whether I have the information necessary to make an effective decision.

If I previously answered question 1 with “yes, my project will be derailed if I don’t get an answer right now”, then the answer to question 2 prompts these actions:

If I previously answered question 1 with “no, my project won’t derail if I don’t get an answer now” and question 1a with “yes, I’ll need to address this at some point in the future”, then the answer to question 2 prompts these actions: 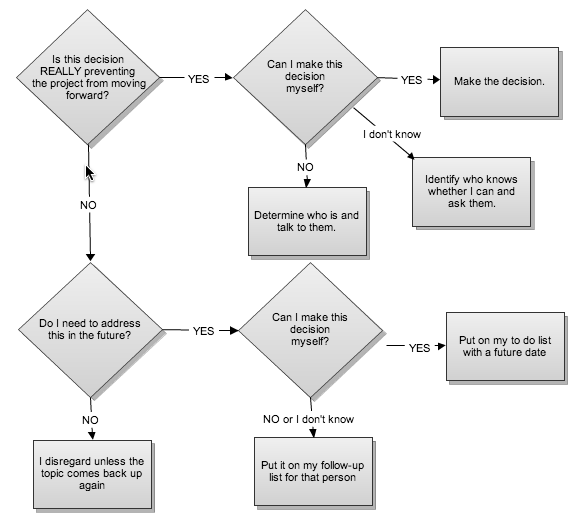 Decision-making flow chart + my version of the GTD system.

Yes, I have an epic list of future items that will need to be decided. I use Wunderlist to keep them organized.

There are decision makers that I always have a long list of items for. Over time I’ve worked out a system that works for me and for the individual decisions makers. For example: