A requirement for my capstone research project on How a Leader Maintains High Productivity Without Team Burnout required an interview. The interview focused on how this specific leader increases employee engagement, manages the stress load of his team and models healthy behaviors and attitudes.

In the interview, it quickly became apparent that the leader had developed a division with a culture that built employee engagement. This leader’s work area was within hearing distance of his direct reports and he had intentionally created a department with very little hierarchy so that he could keep a pulse on how individuals in his group were doing. He continually returned to the point that listening was the best thing he does to know how his employees are doing. Whether it’s listening when they come to him for help, intervening when a potential issue comes across his desk, or listening to his employees interacting with the clients they serve. He is attuned to their normal ways of interacting and to subtle clues that the employee has been pushed to their limit. He said that his technique would probably not be scalable with a large group, but that if he had a larger team to manage he would focus on teaching his direct reports how to listen to their employees. He believes that organic listening is a skill that can be taught.

Organic listening is a skill that can be taught.

It also was apparent that he takes coaching his employees very seriously. By seriously I mean that he sees it as intrinsically part of leadership. However, he doesn’t coach his employees in a serious way. He is intentional about building comradery and a team spirit and keeping laughter part of the team interactions. He said that when he suggests a behavioral change to an employee it is normally handled in a light-hearted way. He also makes it clear that he is not above criticism and is open to feedback from his employees.

When he hires he spends a lot of time considering applicants before hiring them looking not only for competence, but more importantly the ability to relate well with others. He watches for clues about their temperament preferring to hire people who are open to feedback and who are somewhat introspective. He looks for people that may need coaching but who will grow as a result of the investment.

As far as how he manages the pressure his employees’ experience, he stated multiple times that he works alongside his employees when he asks for extraordinary performance. That means being accessible even in the middle of the night or putting aside his to do items for the day if a situation needs his help. He wants his team to know that they (both the leader and the employee) are a part of the team. 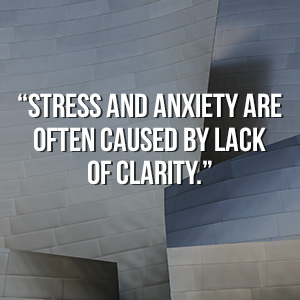 He says that stress and anxiety are often caused by lack of clarity, so he comes alongside his employees and helps them break large projects down into doable segments. This helps employees feel more in control of what they are doing. He has also set up his department so that his employees have some level of control over what they are doing. This doesn’t mean he is removed, but simply that he allows them to handle things and watches for signs that he needs to get involved. He keeps a close eye on areas that will take a toll and that have to be managed. He says that only a leader can mediate push back and he takes that role seriously. He takes the role of team leader seriously because it’s important. He says that there are things that only the leader can do and one of the biggest things is taking care of the team.

Give employees some level of control over what they are doing.

He talks to his employees about the end goal, both for the individual employee’s development and for projects that will bring high-stress levels. He helps his employees see what is beyond the stressful situation. He sees hope as something that is key in keeping people from burnout. He said that he explains that there is a light at the end of a tunnel when employees are under extraordinary projects.

There is a light at the end of a tunnel

I asked him how he developed these perspectives and he said that when he first started managing he read books on leadership, communication, and negotiation. Over time these concepts have become an intrinsic part of who he is and how he responds. From my observations, it seems that his ability to understand what makes people tick and how to effectively work with others is probably part of his strengths/gifting make-up. But he has worked to hone those skills and takes pleasure in teaching others to do the same. He values people. He says that “people are everything, especially in small organizations.” That is why he takes hiring as seriously as he does and why he coaches employees in the way they interact with others. He tells his employees that learning to interact well with others by listening, communicating and using self-control are what will set them apart and allow them to grow into leaders themselves. He encourages them to interact face-to-face if possible instead of allowing emails to get out-of-hand. He sees email communication as something that can waste time and create issues where there weren’t any. By encouraging his team to communicate face-to-face this lowers the amount of time wasted on what can become a stressful activity.

Having seen this leader in action, I found this interview to be incredibly encouraging and inspiring. Hearing his insights on this subject supported my previous observations about his tremendous skills as a leader. It was encouraging to see that it’s been something that he worked to learn and then implement with the people on his team. He cares about people and encourages them when he sees something good. And it seems that he is always watching for people to do something good.

Before the interview, I felt overwhelmed by what I had found in the research. It seemed that preventing burnout was an impossible task for any individual. However, this leader showed that listening and caring for employees is the most important thing to learn to do as a leader. The fact that he does this shows up in the level of respect and trust his employees have for him. He models good interpersonal skills and coaches his employees to do the same. He recommends books for them to read. He doesn’t expect perfection. He knows that people will make mistakes and he has grace for that.

This leader doesn’t necessarily see himself as an example to others in the area of leadership – probably because he has a humble attitude about his skills and abilities. But he is most definitely a model to me of what I want to be as a leader.

The person interviewed holds an executive-level position in a San Diego company. This person manages multiple departments that have significant budgetary constraints and are tasked with multiple, high-stakes projects. This person has successfully led high-productivity teams without team member burnout. It is this experience and expertise that makes this person the ideal interviewee for this research study. The researcher has had the opportunity to interact with this person’s employees and they are each committed to their work and respect the leadership of this person. The researcher admires this leader and has been impressed with stories of how this person has empowered employees, helped work through interpersonal or interdepartmental conflict, and how this person has successfully implemented new ways of handling projects to increase speed and effectiveness.

Questions to be asked

Objective One: Identify how this leader builds engagement and impacts company culture.

Objective Two: Determine how this leader guards against team member distress and uses stress as a tool to help employees grow.